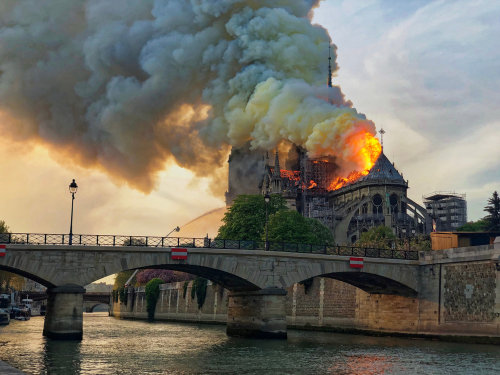 The pictures of the fire of the Parisian church Notre Dame went around the world. The shock sat deeply to see this building in flames, which since 1991 belongs to the world cultural heritage. So it had taken almost 200 years to erect this impressive building and in just one night it almost fell victim to the flames. In particular such old buildings have a large wood portion, since it concerns a building material, which can be processed well and was easily available. However, it has the disadvantage of high combustibility.

The Goetheturm a landmark in Frankfurt am Main, for example, which consisted almost exclusively of wood, became a victim of the flames in 2017. In contrast to Notre Dame, it could not be saved and must be rebuilt from scratch.

The fire in Notre Dame was able to spread so well in particular because the old timberwork was particularly dry. What can be done to avoid such fires in the future, to preserve our landmarks and not to have to invest horrendous sums in the reconstruction? One possibility is the use of sprinkler systems, but this is very costly as many pipes have to be laid for this. Such a system also impairs the appearance of these old buildings and cannot easily be implemented in buildings such as the Goetheturm. When the sprinkler system is used, the fire is extinguished, but the water used can also cause damage to the buildings. A more elegant solution here is the use of flame retardants. The latest developments even allow such flame-retardant agents to be applied as colourless layers, which does not change the appearance and still protects the building. If, as in the case of Notre Dame, a short-circuit occurs, the beams are difficult to ignite and a fire to the extent that it occurred can be prevented in this way. When rebuilding both Notre Dame and the Gotheturm, the inclusion of such flame retardants could make buildings safer in the future.