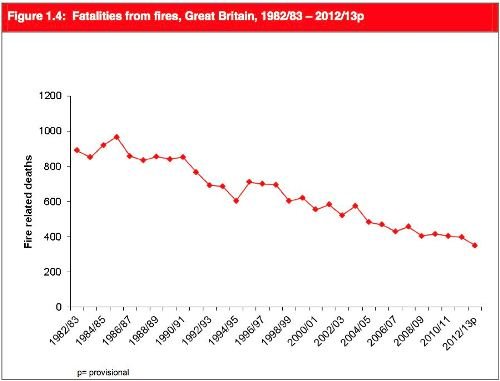 The main reasons are the use of smoke alarms and the introduction of the Furniture and Furnishings (Fire) (Safety) Regulations in 1989. The UK flammability regulations have been in existence since 25 years and in 2000 it was estimated that they had saved up to 1860 lives since their introduction.

While only 12 per cent of dwellings report not having a working smoke alarm in England, more than one third of fires occurred in dwellings where no alarm was installed. This shows the necessity to use smoke alarms to prevent fatalities and injuries in fires.

Three quarters of fire-related fatalities occurred in dwelling fires, the figure fell by 11 per cent (32 deaths) compared to 2011-12. Dwelling fires in which textiles, upholstery and furnishings were mainly responsible for the development of the fires, accounted for nearly 60% of deaths in dwelling fires.

Although fire fatalities have again decreased, smoker’s materials (i.e. cigarettes, cigars or pipe tobacco) still have caused the largest share of deaths in dwelling fires. Here, it has to be made sure that furniture in private homes complies with the flammability regulations. In addition, it is essential not to affect the fire safety of furniture by the ongoing revision of the furniture and furnishings regulations.