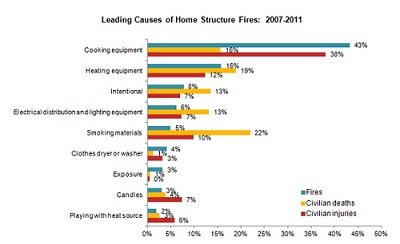 The U.S. nonprofit National Fire Protection Association NFPA was established in 1896 and aims at reducing the worldwide burden of fire and other hazards on the quality of life by providing codes and standards, research (reports and statistics), training and education. According to NFPA, in 2012, there were 1,375,000 fires reported in the United States. These fires caused 2,855 civilian deaths, 16,500 civilian injuries, and $12.4 billion in property damage.

The highest death toll is related to home structure fires. In 2012, they caused 83% of the civilian fire deaths and 78% of the civilian fire injuries. Homes include one-and two-family homes, apartments, townhouses, row houses, and manufactured homes. As can be seen from the following graph, the leading death causes from fires are smoking materials (only 5% of fires, but 22% of deaths). Smoking materials are a major cause of upholstered furniture (28% of fires and 58% of deaths) and mattress and bedding (20% of fires and 51% of deaths) fires.