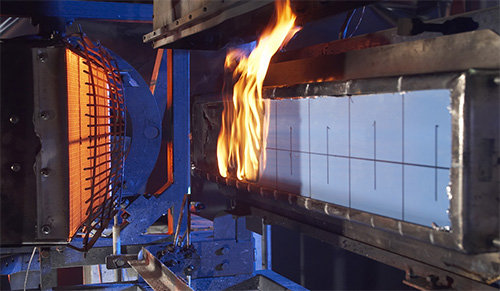 Fire protection on rail vehicles is now truly European: after around 20 years of standardisation work and inclusion of the two European research projects FIRESTARR (Fire Standardisation Research in railways, 1997-2001) and TransFeu (Transport Fire Safety Engineering in the European Union, 2009-2012) the standard EN 45545 “Railway applications. Fire protection on railway vehicles” has eventually been enforced in August 2013. It consists of 7 parts:

EN 45545 -2 describes the product requirements in various hazard levels (HL); they are used for the classification of fire safety demands for materials and components.

EN 45545-2 contains very stringent fire safety requirements and tests that will set the state of the art in many parts of the world. In the future, materials and components will comply with high fire safety requirements. They have to meet the tests for Flame Propagation to ISO 5658-2 (critical heat flux), heat release in the Cone Calorimeter to ISO 5660-1 (maximum average of heat emission MAHRE) and for smoke development and toxicity in the Smoke Chamber to ISO 5659-2.

Already end of 2013 it is foreseen to start with the revision of EN 45545-2 because some topics could not definitively be included into this standard. They concern

There is still a lot of work to be done!