Fire statistics in Great Britain: Number of fire victims has been declining due to strict fire regulations

One of the best documented fire statistics in the world are those of Great Britain (England, Scotland and Wales), which started in 1944. Reports of the fire brigades on fire incidents began in 1947 and since became the basis of the current fire statistics in Great Britain. The GB fire statistics cover accidental and deliberate fires, fatalities from fires and non-fatal casualties, as well as the type of fires.

The most common identified cause of death from a fire incident is being overcome by gas or smoke or toxic fumes. In 2011-12, fire and rescue services reported 380 fire related fatalities of which 130 people died because of this cause, accounting for 34% of all fatalities. A further 74 (19%) fatalities were attributed jointly to both burns and being overcome by gas or smoke, whilst 94 (25%) were due to severe burns alone. The rest is classified under unspecified (14%) or other (8%).

The continuous decrease in fire deaths in Great Britain, and particularly for dwelling fires  since over 20 years is due to the strong regulatory activities on fire safety. The Furniture and Furnishings (Fire) (Safety) Regulations 1988 (latest amendment 2010) set levels of fire resistance for domestic upholstered furniture, furnishings and other products containing upholstery. Upholstered furniture meeting these requirements will not be ignited or propagate an initiating fire when exposed to small ignition sources such as cigarettes, open flames (gas burners of varying intensity) and a series of wood cribs as larger ignition sources. The Smoke Detectors Act of 1991 prescribes the use of smoke detectors in new dwellings. Both regulations have initiated the ongoing reduction of fire incidents and thus of fire deaths in Great Britain, although the amount of combustible materials and products in dwellings has been increasing at the same time.

As an example for England, the following Figure summarizes deaths by type of fire from 2000 to 2010. 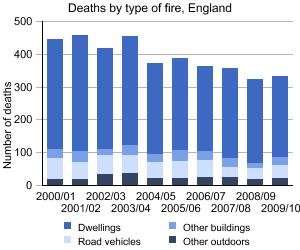