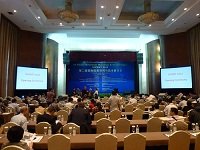 The 2012' International Symposium on Flame-Retardant Materials & Technology, ISFRMT 2012, September 17-20, 2012, took place in Chengdu, China. Organized by the Chinese Flame Retardant Society and the Sichuan University of Chengdu, this 2nd international conference was well attended with around 300 participants from China, as well as from other Asian countries, Europe and the USA. Speakers and audience mainly came from academia and industry (polymer and flame retardants producers).

11 keynote and 21 oral presentations were given and over 50 posters presented at this conference, reflecting the latest state of the art and innovations in the field of flame retardancy of polymeric materials. The topics covered the most important fields in fire safety including fire behavior, flame retardancy mechanisms, new flame retardants and nanocomposites, flame retardant polymers, composites, fibers & textiles, thermosets and coatings, elastomers and rubbers, wire & cable, consumer and industrial applications and last not least fire performance, standardization, regulations, tests and environmental aspects.

Another important topic was the flame retardancy of thermosets, particularly of epoxies used in printed circuit boards.  New developments in additive and reactive flame retardants for FR4 epoxies were presented for DOPO (9,10-Dihydro-9-oxa-10-phosphaphenanthrene-10-oxide), phosphorous-containing curing agents, and synergists such as ZnO.

Many presentations dealt with nanocomposites (nanoclays) particularly for polyolefins, where they promote char formation in conjunction with other flame retardants.

An important new development is the substitution of hexabromocyclododecane (HBCD) in polystyrene foams (EPS/XPS) by a new polymeric flame retardant based on brominated polybutadiene polystyrene block copolymer. As HBCD will be phased out for environmental reasons in Europe and Japan in the next few years, this new flame retardant, which has an excellent environmental and health profile, will be used soon in polystyrene foams.

Finally, status and trends of flame retardancy developments in regulations and tests in Europe were presented for the construction, transportation, electrical/electronic application and furniture sectors.

The conference gave an excellent overview on new developments in flame retardants, flame retardant polymers and has illustrated the comprehensive R&D work of academies and industry in China and other parts of the world.

Conference details and program are available under: