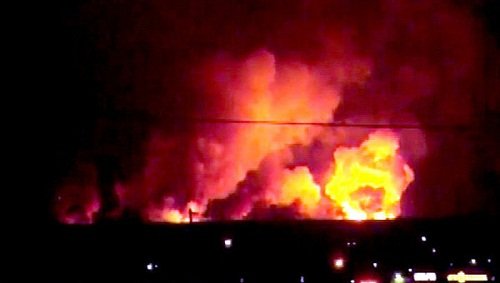 Russia has an appalling fire safety record.  The Russian fire statistics officially recorded nearly 180,000 fires in 2010, killing 13,000 people. On average, fires claim the lives of 35 people daily in Russia. In the United States, with a population over twice as large (USA 313 Mio. vs. Russia with 143 Mio. inhabitants), about 2,600 people died in fires in the reported period. According to Fire Safe Europe information, about 12 people die in fires in Europe every day, or some 4,400 annually out of a population of 502 Mio. for the 27 Member States. Per million inhabitants, there are 10 times more fire deaths in Russia (91) compared to the USA (8.3) and the European Union (8.8).

The most devastating fires in Russia in the last years were the Lame Horse Nightclub fire (5/12/2009) in which over 150 people died after pyrotechnics ignited the plastic ceiling covering and then wooden decorations in the club and emergency exits were either not indicated or partly sealed.  Two years earlier (20/3/2007), in a Southern Russian retirement home blaze 63 pensioners and medical staff lost their lives.

A recent blast at an arms depot in the Urals Republic of Udmurtia on 5 June 2012 with 95 people injured, prompted Russian President Dmitry Medvedev one day later to sign into law a bill to raise fines for violations of fire safety regulations. In line with the law, fines are doubled for individuals and raised tenfold for some organizations.

In March 2012, the Russian Emergencies Ministry had already adjusted about one-quarter of Russia's fire safety standards to European norms. However, the European Euroclasses classification system and some of the related reaction to fire tests have not been introduced so far.

Although some of the Russian fire testing houses already have the European fire tests available, they are not yet officially used in Russia. This particularly concerns the most important of them, the Single Burning Item (SBI) test.