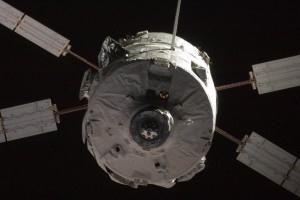 January 2012. For the first time, an international team of scientists (including scientists from Bremen, Germany) has been allowed to deliberately set a fire in a space vehicle to find out how fires develop in microgravity and how to avoid them. It is foreseen to carry out the experiment in an ESA Automated Transfer Vehicle ATV on its way back from the International Space Station ISS before it burns up when entering the earth atmosphere. The ATVs bring fresh supply and equipment to the Space Station and take waste on their way back.

From the results, the scientists hope to get information on how well the tests on earth reflect the flammability of materials during a space flight. Provided the necessary preparations are finalized until then, the fire experiment could already be carried out in 2013 during the ATV-mission 4.

A fire on board a manned space vehicle would have catastrophic consequences.  Therefore, the astronauts' clothing, insulation materials, plastics parts and wire & cable are tested to flammability before use. In a test developed by NASA, the NASA Technical Standard 6001B, a vertically positioned sample of the material is ignited at the bottom. Another vertical test with ignition from the top is the Limiting Oxygen Index Test (LOI), developed after the fire of the command module of the Apollo space vehicle, which led to the deaths of three astronauts on 27 January 1967. Today it is used as a flammability screening test for new materials and for other applications (i.e. in railway coaches).

Under microgravity, flames behave in a completely different way, because in spite of its lower density hot air is no longer lighter than cold air. Thus, there is no chimney effect, which normally sucks fresh air and conveys the hot fire gases away. The consequences: a fire may remain smaller and develop more slowly; however, it may also remain undetected for a longer period of time and reach higher temperatures.  The experiment's objective is to clarify, what the impact of these factors is under real conditions.

On Earth, gravity-driven buoyant convection causes a candle flame to be teardrop-shaped (A) and carries soot to the flame's tip, making it yellow. In microgravity, where convective flows are absent, the flame is spherical, soot-free, and blue (B).