Frequent cause of fires at Christmas: Candles on dry Christmas trees and Advent wreaths

A fire in the historic old town of Constance on 12 Dec 2010 caused a loss of around five million Euros. Two 73 and 84 years old residents were taken to hospital with minor injuries, as the Konstanz police and fire department announced. In addition, a firefighter was slightly injured by flying debris. Three residential and commercial buildings from the 17th and 18th Century were involved in the fire. While two buildings completely burned down, the third was badly damaged. In the early afternoon, the building in the middle collapsed. According to first findings of the police, an Advent wreath mounted under a ceiling beam in the stairway or hallway might have initiated the fire. A total of 54 people became homeless.

Such a dry Christmas tree is a „fire bomb". A 2.20 meters high spruce has around 400,000 needles. And the latter, not the branches or the trunk, are virtually representative of the dangerous fire load of the tree. If you cut a needle and place it under a microscope, you see that the interior of the needle is made of tiny resin nests. If these nests are heated, eg by a candle flame, the resin begins to liquefy and evaporate. The gas generated builds up such a high pressure that the surrounding plant tissue literally explodes. The drier the tree, the faster this happens. The gas released from the resin instantly flashes and initiates a chain reaction. Flames then jump from needle to needle, tinsel is burned off, ball ornaments fall down, and upright candles soften and soon fuel the fire as "arsonists". Within seconds the whole tree is on fire. Gift boxes and papers, curtains burst into flames. Eventually, the tree is top-heavy, falls over and leads to flashover. While the family in the dining room is carving the Christmas goose, the windows burst in the living room. Now, the Inferno can no longer be fought with a bucket of water; the only way is to immediately escape, and to notify the fire department by emergency call.

For more information and an impressive series of videos please see http://www.fire.nist.gov/tree_fire.htm 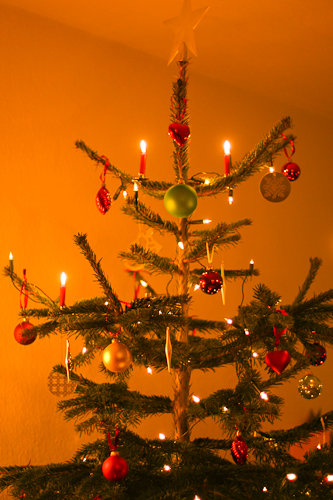