The directives on the collection and recycling of electrical and electronic equipment (WEEE) and on the restriction of certain hazardous substances in electrical and electronic equipment (RoHS) have been in force since 2004. Improving implementation and enforcement of laws on electrical and electronic equipment and cutting unnecessary administrative burden are the main objectives of the revision of the WEEE and RoHS directives proposed by the Commission on 3 December 2008. The proposals presented by the Commission are currently being discussed within the European Member States. In parallel, the European Council also addresses the proposals. The revised versions of the directives will be submitted to the European Parliament probably in the 2nd half of 2009.

Under the new WEEE directive, registration and reporting obligations for producers would be harmonised and national registers would be made interoperable. It is estimated that savings under the proposed revised directives would amount to some €66 million. The directives also seek to better control the illegal trade of electrical and electronic equipment.

The proposed revised WEEE Directive sets a new binding target for the collection of electrical and electronic equipment. To date, only 33% WEEE is reported as collected and treated, while 13% goes to landfill, and 54% potentially to substandard treatment inside and outside the EU (Illegal trade to 3rd countries). The Commission proposes to differentiate the targets by setting mandatory collection targets equal to 65% of the average weight of electrical and electronic equipment placed on the market over the two previous years in each Member State by 2016. The recycling and recovery targets of such equipment now include the re-use of whole appliances, and weight-base targets will increase by 5%. It is also proposed to set targets for the recovery of medical devices.

The proposed revised RoHS Directive would cover medical devices and monitoring and control instruments. A list of "priority" substances posing particular environmental concerns when used in electrical and electronic equipment will be assessed in line with REACH with a view of a possible ban in the future. Complying with the requirements of the directive will also be made easier with the introduction of the CE label for electrical and electronic equipment.

To date, the RoHS Directive restricts the use of the heavy metals lead, cadmium, mercury and hexavalent chromium, as well as the flame retardants groups polybrominated biphenyls (PBB) and polybrominated diphenylethers (PBDE).

In the proposal for the revision of the RoHS, four substances, the plasticizers DEHP (bis(2-ethylhexyl)phthalate), BBP (butylbenzylphthalate) and DBP (dibutylphthalate) as well as the flame retardant HBCD (hexabromcyclododecane) are mentioned in the new Annex III, where substances to be evaluated for restriction are listed. However, neither timeline nor procedures exist for their examination and potential transfer into Annex IV (restricted substances). The German Environmental Protection Agency (Umweltbundesamt) has published a position paper demanding the addition of two more flame retardants: medium chain-length chlorinated paraffins and additively used tetrabromo bisphenol-A (http://www.umweltdaten.de/abfallwirtschaft-e/stellungnahme_zur_rohs_revision_english.pdf) 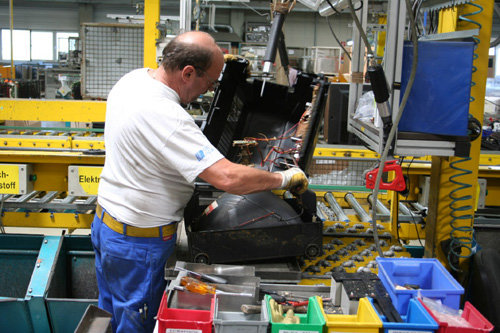