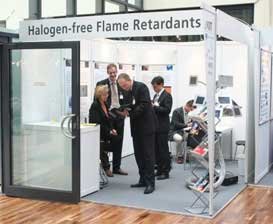 From September 8th to 10th , the Electronics Goes Green Conference took place in Berlin, organized by the Fraunhofer-Institute for Reliability and Micro-integration (IZM) and the Technical University of Berlin. This conference is a well-known forum for electronics and the environment, which was attended by 520 delegates from 26 nations, including many prominent electronics manufacturers like Intel, Dell and Panasonic. The focal topics were the energy consumption and the related CO2-release from electronic equipment, recycling options and hazardous materials like the heavy metals and certain brominated flame retardants which are regulated under the RoHS-Directive .

Part of the conference was a exhibition area with 26 participating companies. Under the leadership of the Karlsruhe Institute of Technology (KIT), leading manufacturers of halogen free flame retardants presented their growing array of suitable flame retardants for various polymers in electric and electronic applications to electronics companies and environmental organisations and authorities: Clariant, Ciba, Budenheim, Nabaltec and Lanxess were represented. DELL presented their "green PC" which will be introduced in late 2008 and which is almost completely free of brominated flame retardants and PVC (the circuit board, chip and chipset, memory, system blower plastics, cables and chassis plastic parts). Instead of a hard disk drive, the PC contains a solid state disk which does not have any moving parts and also reduces the power consumption significantly. According to some sources, from 2011 Philips plans to join other leading OEMs like Apple, Sony, Hewlett Packard and Intel in their efforts to go halogen free.

Unfortunately, a discussion on the revision of the RoHS directive (see May 2008 news on this website) could not take place as planned, because the presentations planned by German Oeko-Institute were withdrawn. The current draft for the RoHS revision still mentions the brominated flame retardants TBBP-A (Tetrabromo bisphenol A) and HBCDD (Hexabromocyclododecane) as potential candidates for the list of restricted substances.

The next European conference on the environment and electronics will be the CARE Innovation in Vienna in November 2010. The next Electronics Goes Green is planned for 2012.