On August 20, 2007, a China Airlines jet exploded into flames at Okinawa airport after arriving from Taiwan, but all 165 people aboard escaped alive. All 157 passengers - including two small children - fled the Boeing 737-800 unhurt on inflated emergency slides just minutes before the plane burst into a fireball, a Transport Ministry official told reporters.

Officials said that the aircraft skidded on the tarmac on its way from the runway to the gate after landing, starting a fire that prompted the emergency evacuation. The eight-member crew also safely left the plane.

"The fire started when the left engine exploded a minute after the aircraft entered the parking spot," said another official, adding that airport traffic controllers had received no report from the pilot indicating anything was wrong.

Several passengers interviewed by Japanese NHK TV said they were suddenly told to use the emergency slides to evacuate as they were preparing to get off the plane after what seemed like an ordinary landing. Some said they saw smoke and flames entering the cabin and that they heard explosions minutes after they exited the aircraft.

News reports said a massive fuel leak from a damaged pipe near the plane's right engine could have led to the explosions. Authorities are also investigating whether any loose plane parts or objects could have been sucked into the engine, damaging the fuel pipe, a News agency said.

A catastrophe has been prevented by the pilots and the crew who acted with great bravery. The entire evacuation only took three minutes after ground crew told the pilot they spotted fires on the jet's wings. In addition, fire safety regulations for aircraft require a fuselage to resist an external fuel fire for four minutes, and the combustible flame retarded materials used in the cabin interior to minimize fire propagation, heat release, and the formation of smoke and toxic gases within these four minutes, for ensuring safe evacuation of passengers. Both, the bravery of the crew and the fire safety requirements for aircraft eventually saved the lives of the 165 persons involved in the fire. 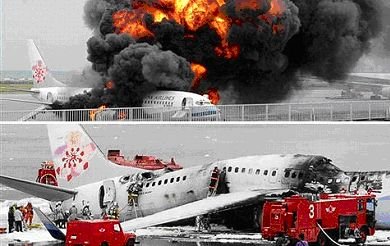