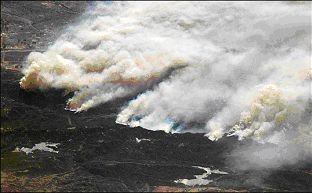 A wildland fire is an uncontrolled fire that pops up fire often occurring in wildland areas, but which can also consume houses or agricultural resources. Common causes include lightning, human carelessness, arson, volcano eruption, and pyroclastic cloud from active volcano.

Statistics show the extent of destruction caused every year by wildland fires:

Wildland fires threaten urban fringes with communities built in the vicinity of highly flammable forests. Examples for such catastrophic fires are the November 1997 Sydney area fire in Australia, and the San Diego County fire in October 2003, one of the largest fires in California history, which destroyed 2 232 homes and killed 15 in San Diego County.

As a consequence, the California Department of Forestry and Fire Protection commissioned a study published in July 2004 on how to better protect homes and buildings against the impact of such fires, which resulted in a proposal for Urban Wildland Interface Building Standards (UWIBS). It contains fire safety requirements standards and tests, now adopted by the State Fire Marshal, concerning:

The UWIBS will become effective in January 2008. Homes in "Very High Fire Hazard Severity Zones" will have to meet stringent fire tests necessitating the use of flame retarded construction products.